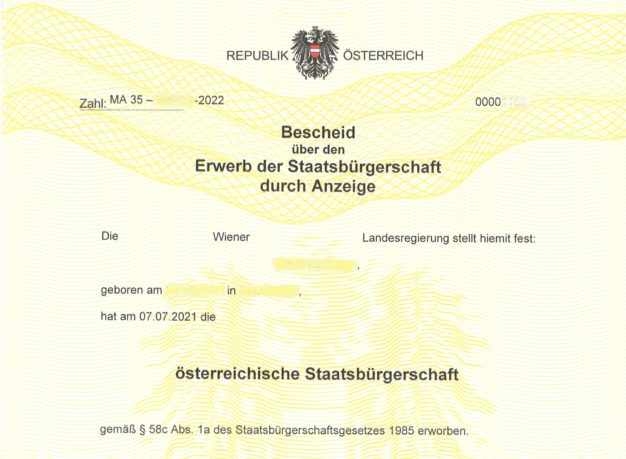 Naturalization for descendants of victims of National Socialism

Persons persecuted by the NSDAP for political, religious or other reasons during the so-called “Third Reich” and their descendants already had the possibility to obtain Austrian citizenship in a privileged way by notification according to § 58c StbG. The Austrian Ministry of Foreign Affairs and the Ministry of the Interior provided comprehensive information about the legal situation and thus helped to inform affected persons about the possibility of obtaining Austrian citizenship by means of notification (link Federal Ministry of Foreign Affairs, link Federal Ministry of the Interior).

The competent Austrian authority, i.e. the Viennese provincial government (Magistratsabteilung 35, or “MA35” for short) has already applied this provision many times. Numerous descendants of victims of National Socialism have since made use of this possibility. Several thousand descendants of victims of National Socialism from all over the world have applied for and received Austrian citizenship in this way.

Claimants are allowed to retain their current citizenship, e. g. the US or Israeli citizenship. This legal situation creates an exception to the fundamental ban of dual citizenship in the Austrian Citizenship Act (StbG).

Through the recent amendment to the Citizenship Act, Federal Law Gazette I 48/2022 (link Federal Gazette), the Austrian legislator has attempted to eliminate cases of hardship and objectively unjustified differentiations between different groups of descendants of victims of National Socialism.

Due to the narrow wording of the scope of application, so far only descendants of Austrian citizens who had their main residence in Austria before the expulsion were entitled to claim. This legal situation led to cases of hardship. Especially descendants of Holocaust-survivors who were abducted and encamped in Austria could not apply under this citizenship program. For example, the authorities negated the existence of a principal residence in cases where the persecuted ancestors were deported to Austria during the Second World War and interned in concentration camps here.

This applies, for example, to descendants of persons who were persecuted by the National Socialists on account of their faith, their political views or for other reasons and who held Austrian citizenship. If they had not lived in what is now the federal territory of Austria before their escape but in one of the other successor states to the Austro-Hungarian Monarchy, for example in what is now the Czech Republic, Slovakia, Romania, Hungary or Western Ukraine, they are eligible for citizenship, given that they were prevented from returning to the territory of present-day Austria or entering Austria for political reasons.

Evaluation of the facilitations in naturalization

The change in the legal situation is to be welcomed. The expansion of the scope of award of citizenship by notification for descendants of persons persecuted under National Socialism represents a further contribution to the elimination of historical injustice and reparation.

It remains to be seen whether proceedings conducted under the old legal situation and concluded negatively, in which the authority (Magistratsabteilung 35, or “MA35” for short) denied the acquisition of citizenship by notification, will be resumed as a result of the change in the legal situation.

We have already assisted numerous clients in obtaining Austrian citizenship on the basis of the Citizenship Act and the special regulations for descendants of persons persecuted under National Socialism. 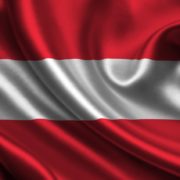